This is a Christmas story.  It came to me, like most good ideas, in a time of quiet in a place of sanctuary.  The ideas from stem from my own background as well as from the many stories I have heard or read from folks describing their experiences during the First World War.

One of most disturbing stories I heard told to me was a woman describing how her dad had felt when he was given a white feather in an envelope when he was sent home from France with a foot injury.  That meant that he was looked upon in the community as a coward.  Not a nice thing to receive.

The other piece of correspondence that was dreaded would be the telegram.  A son, a husband, a father, a brother: the story of a man’s death would be written in less than twenty words.  Killed in action.

I would like to dedicate this story to the memory of those who had to deal with the feather or the telegram, and to those whose lives were lost in between.

For a printable copy, click here: The Gift of a Feather

I just finished as Laurie McLean in Vimy.

I am just starting as Curly McLain in Oklahoma. Who marries Laurey Williams, becoming Laurey McLain.

How crazy is that?

During the run of VIMY we would centre ourselves as actors before the show by having a little scrum on the stage before the show. Some called it our “energy circle” and we each looked forward to it. It took us to the place we needed to be.

Basically, we stood in a circle and held onto the person beside by hooking arms on each others shoulders. Some would close their eyes, others would stare ahead, up down, whatever.

It worked for us. It was profound. For me it conjured visions of myself in places I can’t even describe. It was a moment that, while unexpected, I think we all looked forward to every night.

On closing night we invited the entire crew to take part, and so we had a circle of many more than usual in Victoria Hall. I think it affected us all in different ways, and I haven’t come back from that place yet. Not fully.

Not sure if I will, ever.

A man standing alone in the darkness, picking away. Chink chink chink.

He reveals a little bit of light. A pinprick, shining, and he glances around.

Normally, this is where the stories end, before they’ve started, with one little idea, snuffed. “Out, out, brief candle! Life’s but a walking shadow, a poor player, That struts and frets his hour upon the stage.”

But this time, he glanced around and saw he was not alone, but joined, and he saw that the light grew stronger with their presence. He saw that the source of the light was no longer the little pinprick, but the people around him. They positively glowed with their own brightness, and together as they surrounded the darkness, they became a thing unto themselves.

And that is our story of Vimy. 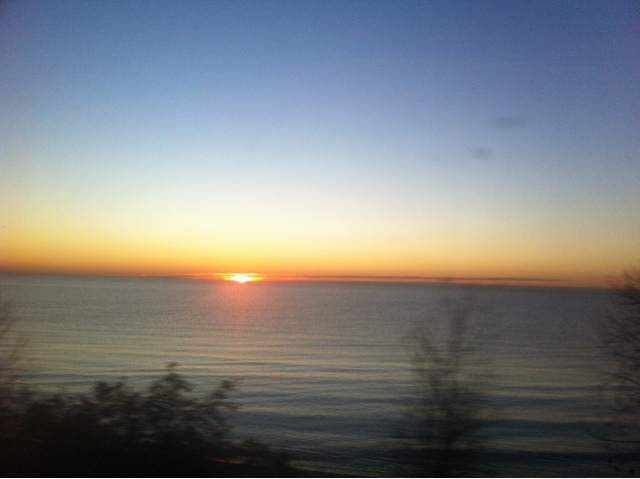 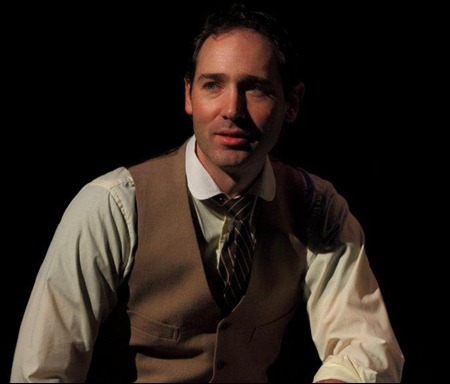 That seems like a bit of a cop-out – like we can just leave it there and move onto other, smaller things.

It was an interesting audience last night – a hundred or so fourteen and fifteen year old kids from a private school.  There was a bit of chatter and whispering, probably some illicit texting, and a few silly reactions to things that really weren’t very silly.

The thing is, I was that kid, once.  I once sat there and didn’t see what was right in front of my face.  There was a time, not so long ago, that I didn’t pay any attention to the world as it passed me by.

But in between then and now… something clicked.  I don’t know what it was, or even if it was a specific time or place, but I didn’t forget those years, or what happened, or who influenced me, or who taught me things.

It is stuck in here.

Tonight, another show, another audience.  Kids and their parents, this time, including my own two.  I’ve spent time telling them about the show, about the war, about Vimy, about what it might have been like to live in that time.  Who knows how they’ll react?

There’s mystery in that, you know, that I wouldn’t trade for all the sold-out shows in the world.

One of the things I dread as an actor is coming out from backstage and seeing a whole troupe of folks waiting to see the cast as they emerge.  This is a really nice way for family and friends to shake hands, give hugs, and generally share in the spirit of the moment, especially right after such a ride that Vimy is.

However, just as I spend so much time preparing to appear onstage as a character, I spend little or no time preparing to see that same audience as JV.  I mean, how could I?  I don’t know what the reaction would be.  The weirdest thing is when folks don’t recognize me at all, or they pretend they don’t, because the relationship that worked fine as stage actor/audience member has now broken down because the invisible line has been crossed.

Aside from all that strangeness, I want to share a few reactions I received over the weekend from people who had just seen Vimy.  I won’t say these are exact quotes, but they are as close as I can remember:

I thought of my young father and what he must have gone through.

Marlena as Clare is extraordinary.

It just stays with you.

I won’t say I enjoyed it, because that would be an insult to those who died, to say I enjoyed what they had to endure, but I will say it was excellent, and it needed to be done, and I needed to see it.

Amateur, professional, I don’t care.  This is just great theatre.  People who know theatre have to see this.

On Sunday, I was sitting waiting for church to start and a couple of friends of mine came up to me.  One was carrying a shopping bag.  She says to me, ‘We were going through some paintings yesterday, and we found this.  We’d like you to have this.  And here is our ticket from 11/11/11 so you can keep them together.  It’s by a local artist.’

I opened the bag and took out the painting, a watercolor.  Poppies.  With something else, in gray, in the background.  A rifle stuck into the soil and left, abandoned, with a helmet hanging from the stock.  The penciled in title read ‘We will not forget’. It took about two seconds, but something got caught in my chest as I tried to say thank-you to her and and I had to throw my arms around her so she wouldn’t see me break down.  Never had that happen before.  I’ll frame the picture and invite people over to see it.

Four more shows this week and then all that’s left are the memories. 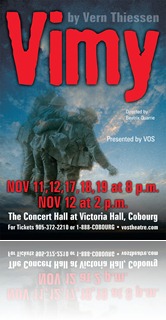 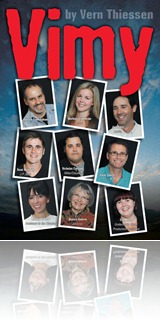 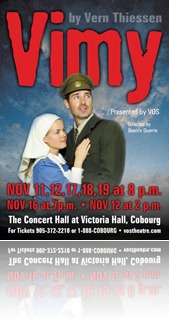 We are ready to go.  Tonight’s preview is for the peace-week group from the Cobourg YMCA, and there is a question and answer period with Vern Thiessen and the whole team after the show.  Thiessen will be appearing via live video feed.  Should be interesting.

I was poking around Amazon the other day and saw my original review of this script:

Vern Thiessen has created what I consider a masterful play that revolves around an essential part of the the Canadian experience. Many believe that Canada became a nation during the battle of Vimy Ridge in WWI, and this play samples from that idea.
This play is beautiful in its use of time and memory in a surprisingly contemporary cross-section of folks from Canada. The staging is simple, and though the stage directions are sparse, it reads in a very visual way.
Read it, and if you can, see it. 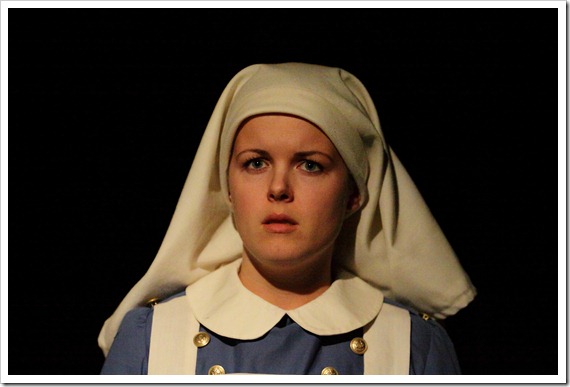 Chopin in the background, photos and video from rehearsal on November 5th in the foreground.
A few cast and crew were interviewed for this as well.  The music underneath Chopin’s Prelude #15 – “Raindrop Prelude” played by Ivo Janssen.

This kind of thing speaks for itself, but it still pales in comparison to the real deal.

Ken Hurford took some absolutely knockout photos from rehearsal of Vimy on Saturday night. Check out the gallery on the VOS website: http://vostheatre.com/shows/vimy.aspx

Here are a few favourites… 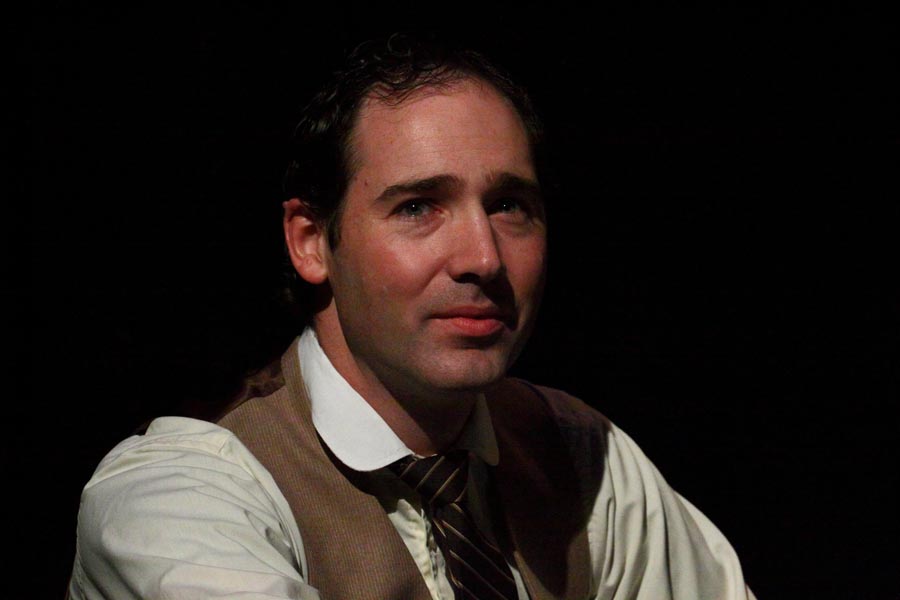 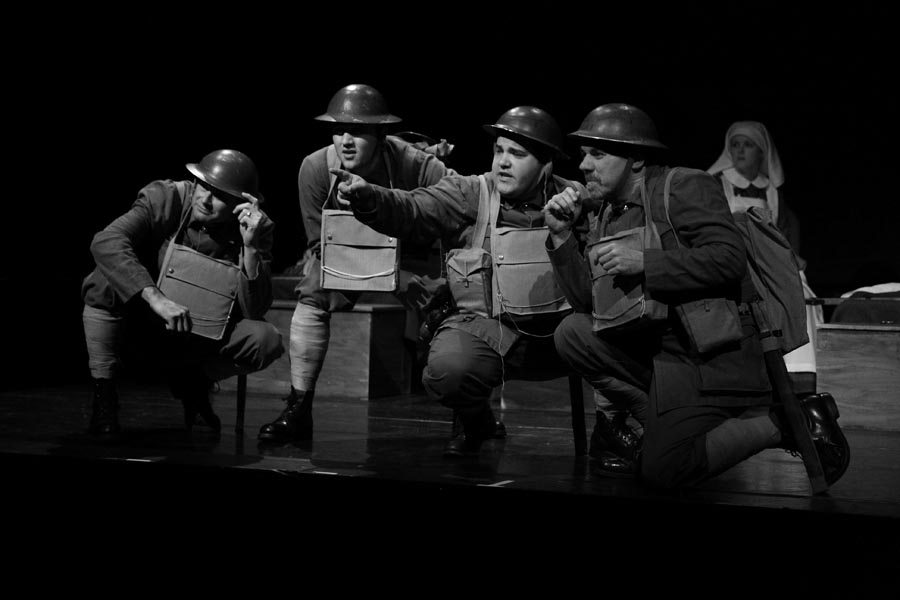 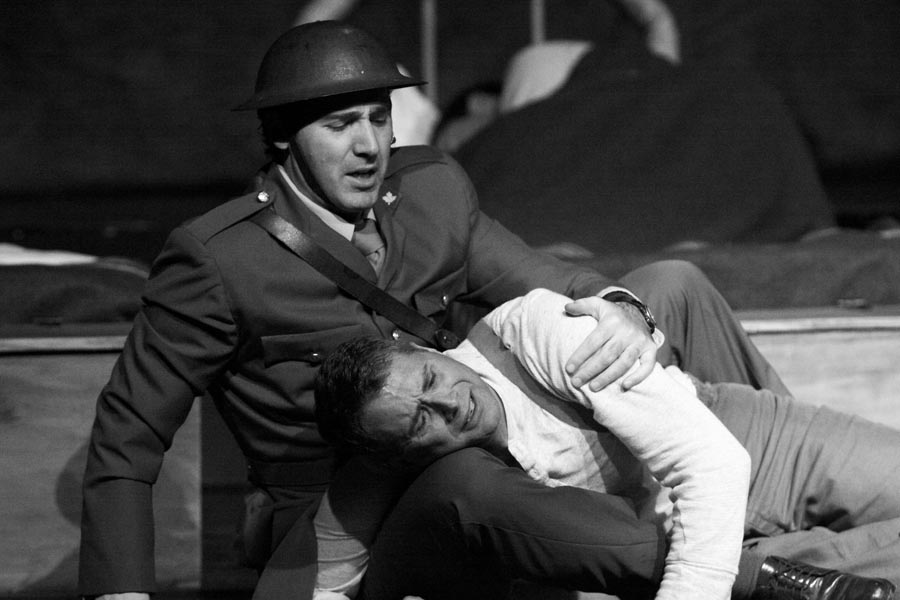 We open this Friday!