One of the things that sticks out for me this past year, one of the events that keeps popping into my head, is a canoe trip we took this summer. We went backwoods camping in Bon Echo park, at Joeperry lake. There is about a five-hundred metre portage and then about a click and a half to the campsites, depending on where they put you. Our site was one of the farthest from the portage, on the far side of the island in the middle of the lake. It took two trips in the canoe to get all of our stuff across – one with my wife, the two kids, the dog, myself, and a few backpacks. Then my daughter Gemma and I went back to get the rest.

It was a great camping experience, overall. Except it was really, really hot and the deer flies were nuts, but the fishing was great.

When it came time to get our stuff outta there, we made a trip with a bunch of bags and equipment the night before we left, to make things easier the next day. Gemma and I went with the canoe and hauled the stuff back to the car. When we came to paddle back with the empty canoe, the wind was playing havoc with us, so we decided to take the southern route around the island (see the map below). 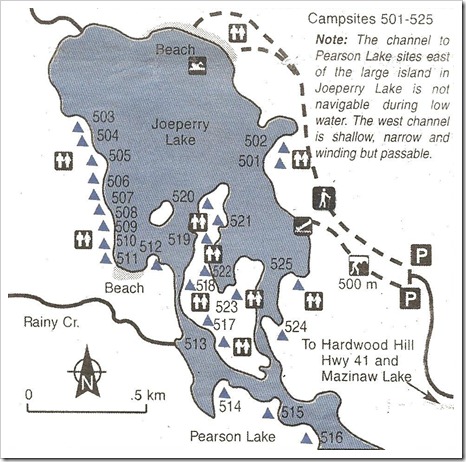 It looked about the same distance, and some people had passed by us on the lake saying they had gone that way without too much trouble. It looked less windy that direction, since it was sheltered by the trees, so we started out at about six-thirty. Plenty of time and plenty of light.

It was a totally bad idea, and I should have turned around right away. The whole place was a bog with barely six inches of water in a trough through a three-foot thick matt of floating sphagnum moss. My feet were big enough to hold me up after sinking to my shins in much, but Gemma sank right to her waist and probably would have gone right under if she hadn’t been smart enough to be holding onto the canoe and wearing a life jacket (as was I – always).

She never flinched. She was a little quiet, but no panic. She just hopped back in the canoe, and I pulled her and it along through the swamp.

The lake at this point was so covered in moss, that there were only a few spots where we could paddle, and that was in a mere eight inches of water at best. And it was WAY further than the map shows, since we couldn’t go in a straight line. After we’d been paddling and dragging the canoe for almost two hours, I did something stupid, again. I broke my paddle.

I was getting tired and more than a bit frustrated at the conditions, and I was trying to get more purchase against the wind that was picking up again as we came out of the swamp area into more of a low-riding bog with almost a foot of water and slime. My paddle caught on a flap of mud and snapped.

Gemma looked back at me, ignored my grimace, and smiled. She handed me her padding and took the useless blade and shaft from mine and kept them safe for later. She even paddled with her hands and tried to push off from the mud when stuck into it.

It got dark in a hurry. The wind picked up even stronger and I had a hard time keeping us out of the mud at the banks and in the right direction when we went out to the middle. Eventually we made it back to camp in the narrows, and my wife and son had lit a little fire. Luckily, Harry had found a roll of duct tape the day before and we were able to repair the busted paddle with metal rods from our fish-fry basket.

But the hero of the day was Gemma. Nine years old. She never complained, never cried, stayed positive, and worked hard to help out. A great kid, and a brave girl who should be mighty proud of herself, as I am of her.

It isn’t quite over yet, but I think Dec 23rd, riding home on the train, is a good time to reflect on it.

2011 was a good year. A great year. The kind of year that should stick out for the kind of reasons that don’t usually come about too often.

Do you ever have that feeling that things are just falling into place? Like stuff could have gone either way but it just worked out? I’ve kind of had that feeling ever since I met my wife Jacqueline, but 2011 really cemented that for me. Like the universe and I are on the same page. Like the people I have around me are on the same page, and with a little momentum, moving in the same direction. It feels like good poetry does after it’s clicked with you.

I’ve learned that hard work pays off, and so does patience. And it pays to have great family and friends. And it pays to not try too hard to get paid. It pays to be rich in all the other ways.

I took risks in 2011. I never looked back, only forward. I got burned, but I got tougher, too. I was supported, and I had the ball picked up for me when I dropped it.

These are the kind of things that I will struggle towards forever. I will find the simple poetry in life, and that will lead me home. 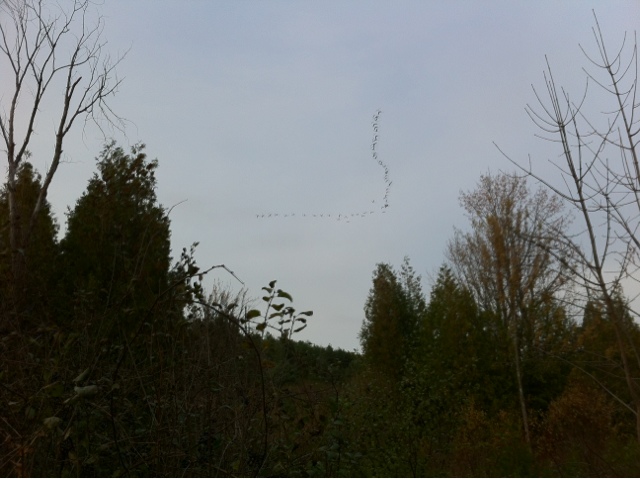 From the director of Vimy, Bea Quarrie.

She said this over and over, so many times that it’s impossible to quote her properly, but almost enough times for it to sink in.

That’s what keeps them wanting more.

I wrote this story last year as a kind of a first for me.  My dad has written a Christmas story every year since I can remember, and it’s always something I look forward to.

I started doing the same thing last year, and it is called Return to the Scene.  It’s kind of a Christmas ghost story, and I think those are some of the best kinds (two of my favourites are Dickens’ A Christmas Carol and Frederick Forsyth’s The Shepherd).

Sometimes I wonder if I choose the path. Or if the path chooses me. 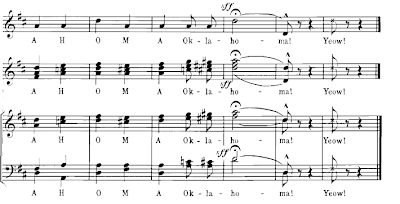 Seven parts of harmony on the title number for Oklahoma! (I love that the exclamation point is part of the show’s name – it makes everything so exciting…).  We had a really good rehearsal and this piece is sounding just brilliant.

Anyways, seven parts.  That’s just gold.  We have no weak sections (well, maybe my section, 2nd tenor, cause there’s only a couple of us, and I have a solo on TOP of the seven harmonies at one point)… but honestly, the sound mix is really, really good.  The ladies are singing 3 parts and all ranges are really audible within each other.  In the men, the parts are simple enough so that the “cool” accidental notes can really be sung with confidence.

In general the, the music for this show, while not being simple, is in my opinion, meant to be sung in a very straightforward style.  In fact, that kind of is the style – straightforward.  That way, when something strays from the straightforward, (like a cowboy selling his saddle, horse and gun) really stands out.

This is gonna be fun…

It’s the first of December, 2011. I think I am finally ready to turn the page from all the things that happened in November and move onto new stuff.

Part of that is just Christmas, but my next project is the VOS production of Oklahoma! in April. Got lots of music to learn, lines to memorize, and most importantly, a character to figure out.

So. This is me turning the page and moving onward. See you on the other side.