Moving to Cloud City: Taking Agility from Q9 to Azure in 3 Months
We were sitting on an aging set of servers and limited resources for hosting our own software. We were growing faster than our capacity to service new hardware.
Find out how we moved over a hundred databases, websites and applications to the cloud in 3 months.

We did some work on accents over the weekend, and if you’ve ever read the script for Oklahoma!, you’ll understand why this is a hot issue for this show. A good portion of the script is written phonetically – forcing the actor to literally sound out the words to get the desired effect.  Think womern instead of woman or women; cain’t instead of can’t; heared instead of heard – many of us still miss this one even after having had it pointed out. 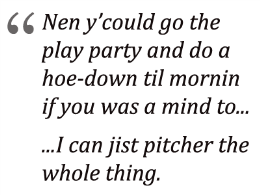 Being forced to twist one’s mouth around strange sounding versions of words we are familiar with makes it easy to slip into a drawl and start chewing up the dialogue something awful. At least that’s my take on what happens when an actor, while reading his or her lines, becomes more enveloped by their own deepening accent the more they read. I’ve heard this done even moreso with folks trying to put on an English accent – especially a London cockney – and everyone ended up sounding like they’re the same character from a Dickens novel.

The thing is, an accent is meant to serve the audience, not the actor. The whole point of talking with a particular accent is to take the audience further into the world of the character. A put-upon accent is really just a distraction, and if an actor persists with it – or worse, tries to be funny with how they are talking – he or she is doing so on behalf of themselves, not the character. As a previous director would insist, in these cases an actor is simply “commenting” on their character as opposed to portraying their character.

In my mind, less is more when it comes to accents, and at the very least, consistency is key.

I have heard people talk about authenticity where it comes to this stuff, but in my mind, especially with live theatre in front of a rather tight demographic – the perception of the audience is even more important. Why speak in a thick Scottish accent when much of that dialogue will be missed by those who don’t understand it?

Needless to say, I’m looking forward to feedback from the work on the weekend, and, eventually, from our audiences.

MG Siegler on the MPAA response to SOPA protests. His best line:

“The truth is that the Internet, like all the other technologies before it, is a transformative tool that could scale the film industry to new heights (in terms of both popularity and profit). But such an end requires some work and some rethinking.”

It’s a fun read from his first (I think) post on PandoDaily. Probably because it’s so hard to imagine a corporation like the MPAA or any of the big media companies actually learning about the technology that bills like SOAP would manipulate. Any learning done by these institutions seems to be done after the fact, and certainly not for the same reasons you or I would have. These folks seems to cling to the past as if it wasn’t just as scary and unknown as the present when it first came about.

Back to the SOPA protests. Maybe it’s just me, but yesterday kinda felt like an online version of Washington D.C., August 28, 1963. I wasn’t there, though, so what could I know? The thing is, it’s the only “protest” I’ve ever witnessed that was a combined, concerted effort where folks, led by Wikipedia, Flickr, and others, actually made an effort to educate the public on their stance, and it seems to have worked. And as far as I know, nobody burned any cars, and no police fired rubber bullets at the crowd. And it spawned as really great comic from TheOatmeal.com.

Another favourite writer, Cory Doctorow, puts the shoe on the other foot for MPAA CEO Chris Dodd, noting that his abuses of power include the insertion of contradictory and malignant warnings in the front of practically every commercial video disc ever sold.

Doctorow was writing for the website BoingBoing.  His stuff is always solid, and worth really thinking about.

These two guys, Siegler and Doctorow are becoming my most respected writers about this industry on the web.  I find that I’ve stopped following branded news agencies as much as I follow individuals via their twitter or tumblr feeds.

Image above pulled from PandoDaily

From a blog post I wrote this week for Agility:

When talking about putting magazines on the web, I like to think of a web where current magazines or “e-zines” or whatever they’ve been called in the past, never happened.

My favourite quote, though:

You see, magazines have the potential to become the “darling” of the web, the kind of destination that will make readers feel good, just like holding a real print magazine ought to feel.

Agility Blog: A Plan for Creating an Online Magazine

I want to put these thoughts in writing so anyone who knows me can know how I feel about building trust.

Trust means never hanging anyone out to dry in an attempt to vilify them in a crisis, even if they are at fault.  Family, friends, colleagues, customers, whoever – nobody deserves to have crap blown back in their face just because one individual felt like being vindictive.

Trust means meeting a crisis or a time of transition together, as a group, unified. Those times are what community is for, and if I forget that, the community should remind me.

We owe it to each other to build trust every day, and today is no exception.

A good look at the history of Android and the Open Handset Alliance from someone who is on the side of the consumer. As far as I am concerned, Google blew it when the distribution deal with Verizon became more important than the original vision for the platform. A free, unlocked version of Android sold by Google (or given away by Google) in a Google-branded phone would have made all difference, but that was not to be.

Best quote? I’ll take a partial so I do t spoil his punch line for you:

“I hate Android for the same reason that Severus Snape hates Harry Potter.”

parislemon.com: Why I Hate Android 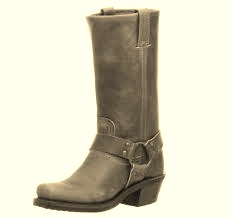 Curly is one of the principle characters in Oklahoma, in case you didn’t know.  I’ve been cast to play him in the VOS production opening this April. So, I figured I post my thoughts about him here, just for fun.

According to some folks, he’s about as deep as a dried up mud puddle, but I don’t believe that. It seems to me that there’s a lot going on with Curly, and he’s come from a place of contemplation and thought to get to where he is at the beginning of Act 1, Scene 1.

You see, all cowboys sit in the saddle for hours on end, just thinking, contemplating. And what’s Curly got on his mind? One thing: the future. Part of that future is Laurey, a big part, and he’s willing to give up anything and everything to win her over. Another part of it for Curly is the changing land itself: fences going up, crops coming up, folks staking out their place in world. While Jud hides away from the reality of the changing landscape, holed up in the smokehouse, Curly sees a challenge, something to take on.

In a way, that’s one of his major flaws, thinking that his future can be won over, and that Laurey is part of his conquest, but that’s the way he is, that’s what he knows. It’s how he deals with the world. Aunt Eller, seeing the strength in Curly, and his stubborn determination to succeed, is drawn to him . She can see that he’ll be around when the dust settles and all the others have disappeared.

All characters have choices, too. There are a couple of points where things could go either way if Curly doesn’t make the right move. For one thing, what is he thinking when he confronts Jud in the smokehouse? Does he think Jud can be scared off? Is he thinking that he might have to kill him? I’m not sure Curly himself has this figured out. He just knows he has to go deal with a problem. Conquest.

And there’s a point where Curly goes all the way, throws in everything he’s got, to win over Laurey. Does he do it because he doesn’t want Jud to “get her”? Does he just want to win? Or does he see his future, all the things that he’s dreamed about, sitting on his horse, enjoying the sunshine and the crops and the open spaces, all about to disappear?

Curly reminds me a bit like one of Louis L’Amour’s Sackett family. Like Tell Sackett, maybe. He’s kind of a loner who’s good at breaking horses and roping cattle and shooting his pistol, but brighter than his station, and whiles away the hours doing the repetitive saddle-work whilst contemplating a different life, settling down and raising boys. The hardest thing to secure for that future, and an absolutely essential element? A good woman. I know, I know – this kind of thinking totally objectifies women and reduces them to a piece of property, but that’s the x-factor here. Women of this time are coming into their own and don’t want to be someone’s property or conquested or whatever. That’s where the sparks begin to fly between Curly and Laurey.

There’s lot more to think about than just the few ideas I’ve started with, but it’s a start…