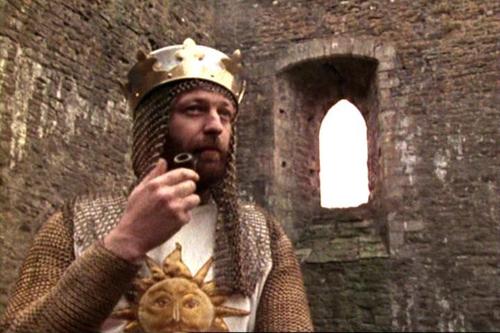 I’ve been thinking quite a bit, in preparation for dealing with the character I am playing in Spamalot, Sir Robin, about how Monty Python actually works.  Why is it so funny, and why is it so damned relevant?  I think we need look no further than The Holy Grail‘s Graham Chapman for that, and also my Uncle Exton.

You see, I didn’t grow up watching Monty Python, I only experienced it through my father’s older brother, my Uncle Exton.  Yes, I understand that his is a most unusual name, making it thus more awesome to bring up in conversation, though this isn’t one.  However, he used to quote Python laughingly time and again.  Songs, skits, voices, funny walks, he did it all, falling over himself laughing, and then apologizing to his wife, my Aunt Melba, for embarrassing everyone.  The funniest thing I can remember was looking through a book with my cousin that held God’s Report Card (Latin: 100%). 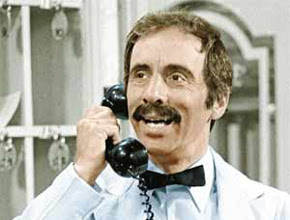 My proper introduction to Monty Python came in a roundabout way when I hooked up with an English Girl (now my wife) who adores John Cleese in Faulty Towers.  Now we lovingly quote Manuel whenever someone says something boorish or with too much assumed authority.

I then started watching bits and pieces of sketches here and there on YouTube, rented The Meaning of Life from the video store, and eventually, after being cast as Robin, watched The Holy Grail on Netflix.

And there you have the single most effective humor device used within Python.  I call it the Semi-Calm Refusal to Comply, where the protagonist is denied his rite of passage through a given scene by a semi-calm antagonist.  Picture the 5-Pound Argument scene, the Black Knight, and others.  They all employ the Semi-calm Refusal to Comply.  Delightful!

I leave you now with a portion of Cleese’s eulogy for Graham Chapman.

“And I guess that we’re all thinking how sad it is that a man of such talent, of such capability for kindness, for such unusual intelligence, should now so suddenly be spirited away at the age of only forty-eight, before he’d achieved many of the things of which he was capable, and before he’d had enough fun.

“Well, I feel that I should say, nonsense. Good riddance to the freeloading bastard. I hope he fries. And the reason I feel I should say this is he would never forgive me if I didn’t. If I threw away this glorious opportunity to shock you on his behalf.”

Incidentally, Chapman’s animated, factually incorrect biography was released last year.  I think we can learn something from that, only I’m not sure what. 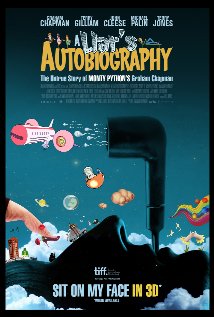 Always look on the bright side of death…. As the title character, Alex Saul does not simply occupy the stage, she elegantly erupts from it.  She spends every millisecond of her time holding court in her prison room of a house completely in character; from her fidgeting fingers to her mischievous eyes, to her lusty flirtations, to her attentions to her playthings.

Everything is askew in this world, indeed even General Gabler haunts the place at an angle, and that keeps everything on edge on this set, especially Hedda, and this is one of the reasons that she is so eminently watchable on-stage.  She doesn’t stand or sit or any of those ordinary things, she flounces, she perches, she hovers, she arcs.  Indeed, you may try to pry your eyes away from her, and if you manage to you will have been more successful than I was.  I wasn’t sure whether to feel sorry for her, be turned on by her, or wish that would just she would shoot something.
The hysterical mad-woman is a common 19th Century theme, with our poor pregnant darlings either filling their pockets with rocks and leaping into the Thames, or relegated to the attics of various bourgeois households, watching the wallpaper curl and fade.  Ibsen is unique not only in his prescience of what the 20th century will hold for mankind, but also by his exploration of what the experience of being one of these women actually is.  She’s caught between classes, she’s without vocation, she’s clever, and she dreads what will happen should the walls of her upper-middle class prison collapse upon her should a lump appear in her belly.
So, yes, Alex Saul as Hedda is worth the price of admission and more all on her own, but what makes the piece so memorable for me are the tableaus that director Bea Quarrie sets up for us to ponder over.  When David Russell as Eilert Lovborg crosses to stage right, professing his vision of the near future through the metaphor of a woman, with Hedda perched with her luscious back to us on the chaise longue at the left, and the two bumbling fools in the centre giggling on the sofa, it’s hard not spot the allegory.  The other moments I will leave to you to find, since they are well worth watching for.
When it comes to the rest of the ensemble, I think one could listen to Christopher Spear’s Judge             Brack for hours without being bored, his voice is that good, so that we might almost forget to hate him as much as we are beckoned to.  Mark Paton, too, is wonderful as George Tesman (sometimes Georgie, often just Tesman), and he holds us on the verge of laughter for so long that I couldn’t help but cackle at him at times, though nearly everyone else in the audience was too demur to follow suit.  His relationship to his aunt Juliana, played by Jennie Ryan, is delightful, and those few minutes before Hedda appears in the morning really frame the whole piece well.
Russell as Lovborg is complicated – he is like watching a living metaphor strutting about the set, chanting at Hedda, and serving as the object of her desire, I think he wrangled with the man between the angel and demon adroitly and with class.  Kait Dueck as Thea Elvsted is, I think, our largest source of melodrama here, and her voice calls out louder than anyone else’s on-stage, daring us to tear our eyes away from Hedda for a moment to recognise this woman for her own courage and values, which is admirable, but quite impossible, I dare say.
The moments with Hedda and Berthe, played by Susan Gontier, are really, really cool.  We may not understand Hedda as well as we might like to, but we damned well think we understand Berthe, and I felt something rip inside me each time she was summoned, or entered in darkness to do her assigned duties.
The lighting, too, was rather moving as the set was washed with morning sunshine, or cloaked in darkness to reveal only flames, at one point.  I found myself wishing for a sunset or the rosy pink of a clean, clear dawn, but I don’t suppose the General would have approved of that.

We are treated at times to the music of R. Murray Schafer, and, along with all the other little bits and pieces, another dimension is added for us to grapple with.  His harping is the thing that breaks the grounds of our collective psyche, I think, which is almost a necessity with this material.  I don’t think I can separate the story from the music in my mind, at this point.

In costumes, I can only say that the silk dress which adorns Hedda is such a marvellous piece of art that I can’t really describe it.  I’m a man that doesn’t understand that sort of thing very well.  However, I do recognise when my sensibilities are being played upon, and kudos to whomever decided to redo that piece of the puzzle, because it drew Hedda into her surroundings and locked her, I believe, incontrovertibly inside them.

The play is only on for two more weekends, so you’d better go and see it for yourself, otherwise you’ll just be left wondering, and you’ll have missed out on a piece of theatre that you can’t expect to have known was coming, and you won’t be able to predict will come again.

Tickets are available at the box office, or over the phone, details at the Peterborough Theatre Guild website.