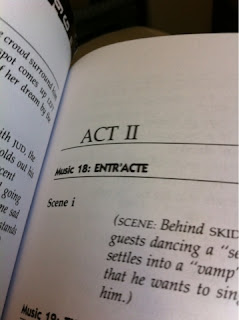 The thing about Oklahoma is the scenes are ridiculously long, and are actually comprised, usually, of several scenes. So Act 2, Scene 1, is actually between 3 and 5 scenes, depending on how you split it up. The fact that we pretty much got through this in it’s entirety yesterday is pretty good. There’s a ton of dancin’, spinnin’, chuggin’, and fightin’ going on, as well as some wheelin’ and dealin’ in the auction.
Steve and I had a chance to do a stare-down during the bidding as Jud and Curly and I think it’ll be tense as all get out when everything settles down a bit. There was certainly a lot of energy hurtling around the room. I think most of us had spinny eyes by the time we were finished.
It brings to mind a few thoughts that I’d like to have out there in the wide world – some stuff that I’ve been thinking about that I find useful when thinking about my own behaviour onstage and off.

If you think you haven’t got an ego problem, look at all the people who you think do have a problem, and think about how better much than them you are, because you don’t have an ego. Good. Now you’ve got an ego problem, just like me and everyone else. Give yourself a kick in the rumplestiltskin and get back to work.

If it’s easy, if you don’t even have to try, than how can you ever grow? You put in what you get out, and killing your ego and getting out of the comfort zone is the first steps, I think, on the path.

This is my worst bad habit. You think you have a better view than the director? You think you have the right to tell another actor how to do their job? Do you have the capability of being in 2 places at once? Nope. I didn’t think so. Learn your lines and your steps and get your entrances and exits, and sing the right notes in the right rhythm, and you’re almost getting starting on taking care of yourself. It’s a big step from their to make it into a performance, a work of art, you know? And that’s just you, looking after yourself. Leave it at that, and I figure you’ll be a lot happier about the effort everyone is putting in.

The truth is the truth

Until you’ve heard and understood a truth that wasn’t the version of the truth that you wanted to hear, you don’t know what truth is. And if you think you know that, maybe you don’t. Maybe the truth is part of that whole journey versus destination thing? Isn’t it more fun when you’re going somewhere, than being at a dead-end? Even if you’re where you wanted to be, it’s a dead end if you don’t have anywhere else to go.

I’ve got a few more, but the train’s just about at the station, and I’ve got to see a man about a horse.
More later – joel