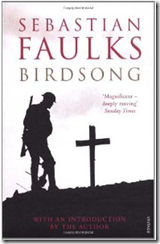 I’ve been reading this amazing novel by Sebastian Faulks called Birdsong which is set in and around France in the First World War.  He also wrote  Charlotte Gray, which has an excellent adaptation. It starts in 1910, and jumps to 1978, but really, it centres on the War and it’s effects on the human psyche.

It’s riveting.  The depiction of human relationships in here is so compelling, it almost hurts to read it, but I can’t put it down because it’s so real.  I wonder through it all about my own life, and I might have been affected had I seen and experienced all of those… things.

You probably won’t read this book.  If you do, that’s awesome, and I want to know what you think of it.  If you won’t, here’s a reason why.

In one of the trickiest sequences in the book, the main character, Stephen, takes a “home leave” to England.  He goes into an expensive London shop to get some new clothes.  The reaction of the shopkeeper says a lot:

Stephen saw the man’s eyes run down him and register his uniform and rank.  He also saw, beneath his formal politeness, an involuntary recoil.  he wondered what it was about him that repelled the man.  He did not know if he smelled of choride of lime or blood or rats.  He reflexively put his hand to his chin but felt only a minimal scratch of beard that had grown back since he had shaved in the Hotel Folkstone.

So here we have, in the midst of war-torn England in 1917, a soldier trying to buy new clothes to wear while on leave.  The shopkeeper ends up, more or less, asking Stephen, an officer in the army that is supposedly preserving his very liberty, to get out of the shop.  Why? Stephen thinks.  Is it my rank (Lieutenant)?  Do I stink?  Am I unshaven and scruffy?  No.  By sacrificing himself in the trenches, and even if he hasn’t died it is still a sacrifice, he has inexorably set himself apart from humanity.  Stephen’s eventual acceptance of this state of affairs is almost triumphant in its sadness.  It’s hard to explain, and it’s one concept of many others that Faulks explores in Birdsong.

We have to remember.