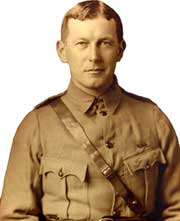 I’ve been reading about John McCrae this week in the book “The World of John McCrae”.  It’s not really a biography of his life, but rather an examination of the times he lived through and the kind of man he was.  Both as himself and as he was seen by others.  It’s remarkable.  He was so selfless.  I got the impression that he would have joined up even if he wasn’t a doctor, just to stand next to his fellow soldiers in the trenches and support them as they stood for their country.  But he was a remarkable physician as well.  And a tremendously tender and yet bold writer, as his poetry reveals.

I was led to McCrae not by following his famous poem, but by a reference in the Clare Gass diary about his letter to her about Laurie’s death.  I found it extraordinary how much comfort she took knowing that her lover’s final day was spent with such a man as John McCrae.  How could this be?  What sort of things would he have done to deserve such an honour?
Have you ever met anyone like this?  It’s a person who seems like, even if only for a moment, that they are the centre of the universe and others seem drawn to them.  Others seems to siphon from people like this through an invisible tube that stretches between them.  I think McCrae was like this.  I think his funeral, for some, was the darkest and brightest hour of the Great War.  I hate to call it that, but it is the truth.
Greatness in men is measured in many ways.  Bravery?  Honesty?  Patriotism?  Love?  Intelligence?
Greatness in war is measured only in death.  And the war of 1915 to 1918 consumed more greatness than any other war before it.
This man John McCrae gave his life to the service of others, and for that he was loved greatly.  And for that his heroism in nigh without parallel.