I am excited for this to begin – finally! It’s been a long haul getting from a first read of the script back in December, securing the rights in January are a bunch of back and forth after that. We are the first, to my knowledge, community non-professional group to do this play, so that is pretty cool in itself.

It took quite a while for us to find a director for this show, and it’s never an easy task at the best of times in this kind of organization. You have to give as many people a chance to read the script, but you can’t go to a bunch of people at the same time.  We talked to several people, and while they were interested, they were either involved with something else, or felt that after reading the script, the show was just out of their comfort zone. So we went through Theatre Ontario and asked them to recommend people to us. Then I talked to Bea Quarrie on the phone, and instantly her passion and vision for this script flicked a switch in my brain. Sometimes you need that little bit of confidence coming from someone else to validate the stuff you’ve been feeling, and that was the case here. Bea impressed me right away with her integrity and capability in approaching a show of this depth. Also, she really seems to “get it” when it comes to dealing with the kinds of abstract ideas that Vimy deals with.

At auditions, I was appalled at how few turned up, given how much effort and money the VOS board had put into advertising the audition date and time to the community.  I really felt that there were actors in our community that would jump at the opportunity to seriously engage with these characters.  Be that as it may, those who DID show up, are top notch people, and I can’t wait to hear them become someone different in the way that they all did during the audition read-through.  It was a group format, and each of us read a bunch of different parts.  It was a great experience, and I had goosebumps for a good portion of it.

When the show was cast, Bea immediately put us all into preparation mode with a phone call to each actor. She challenged me to delve deeply into the character and to discover all the things about both the real person and my character that would put him in that field hospital after the battle of Vimy ridge.

So that’s where I am right now, with a history of “Laurie McLean”, who I have discovered in real life was based a little bit on Laurie Gass. Turns out he was 2nd cousin to Clare Gass (Clare Lewis in the play, the nurse) and is mentioned several times in her diary, which is published and widely referred to as an important historical look at the life of a nurse in the 1st World War.  It’s called “The War Diary of Clare Gass” [Amazon.ca Link]. 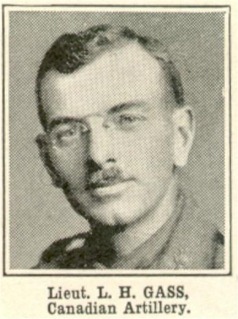 I turned up a bunch of great material on Laurie, including photos, one from a newspaper clipping when he at McGill, and another one that states his military service. There is even a typed letter to his mother from Laurie’s commanding officer which brought me to tears when I read it the first time.

There are parts of Laurie’s story that immediately connected with me when I first read the script: how he followed his girlfriend to war to be near to her; how he behaves when he has to explain that the war is having on him; how he feels at the height of battle itself. I can’t imagine how he must have felt, but I feel I can do his memory, and the memories of those connected to this war, a small service by exploring them and bringing them to light on stage.

You have to realize, though, that Vern Thiessen’s Laurie Mclean, isn’t Laurie Gass, but rather an exploration of the kind of person that he represents, and a tight rolling together of his relationship with Clare and his heroism as a Nova Scotia Highlander.  I can’t know what it’s like to be Laurie Gass, but Laurie Mclean is who I will become for a few brief days and nights this November.

It’s my feeling that the kind of brotherhood shared by soldiers in war isn’t something that we men of the 21st century have experienced. Vimy opens that brotherhood up and digs deep inside the kind of feeling that men in that time had for each other. When you spend every moment together, waking and sleeping, full of terror and full of quiet waiting, rain and snow, sun and wind, dying and broken, alive and elated. I don’t know what that feels like, but I think Thiessen has some clues on how to explore it.

Tickets are on sale now for Vimy, click through to the VOS website to get more details.