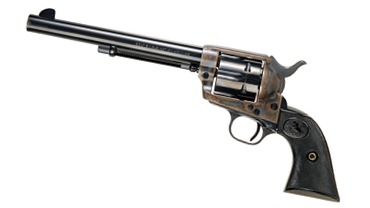 There really isn’t anything very subtle about a Colt 45.

It’s a hell of a weapon, and it has a single purpose; to think about it any differently would be foolish, at best.

It’s a weapon that demands respect.

In the hands of Jud Fry, it ought to put the fear of God into a man.

But is Curly afraid of it? Does he flinch when Jud flashes that six shooter across his face? Does he cower like a dog when Jud fires that thing off? Maybe. He might even show it, a little, if you watch him real close. But are you watching Curly then? Or are you fixated on the face of the man who’s battling all his nerve just to keep it together with his nemesis in his house?

Isn’t it just a couple of fellas making noises to satisfy their oversized egos? Or are they daring each other to do what the other one hasn’t done yet?

As you might have guessed we rehearsed the smokehouse scene last night. Possibly the strangest scene I have ever encountered in any story. It was both exhilarating and exhausting. Steve and I had already been throwing punches at each other in the afternoon (more on that next week…) and we were set for a bit of a standoff, so to speak. We said our piece to each other, and then the guns came out. All I can say, is that it’s a good thing Steve and I are such good friends, cause he’s a hell of an enemy on stage.

Why is it that the American persona has been so obsessed with the wild west for the past hundred years? Can it possibly be that we’ve never been able to get past that little bit of madness, that dark, pre-historic instinct to over-power something with brute force? We might veil it in rhetoric, or hide behind our civilized mannerisms, but is it ever really gone?

And when we turn to that darkness, can you tell when it happened? Was it when the fear gave way to anger? Can you tell when we came back from the edge? Or when we leapt from it with no abandon?

As Curly, I ask, what else would have me do? But I wonder if you’ll be able to answer.

‘Cause you’ll just be staring at the gun, wide-eyed, wondering if it’ll be the end of one of those men.

It demands respect, but it never earns it.

Only with great and subtle power can the force of that weapon be leashed and held in check.

Where will you be watching?