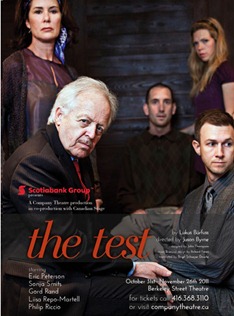 The Company Theatre in Toronto are documenting their rehearsal process…  this is for a play called The Test featuring Eric Peterson, Sonja Smits among others.

The director is this guy from Ireland, Jason Byrne.

The main reason this is interesting (beyond the fact that Peterson and Smits are stellar actors) lies with the fact that this director’s process involves letting the actors do whatever feels natural and instinctive to them instead of giving them set blocking instructions on day one.  It means that everything is more complicated, because the approach to character is an evolving thing, but it builds a performance that is supposedly more cohesive and powerful.

Interesting to watch… I’ve embedded the segment that features Peterson (remember him from this? Yea.  Awesome.), and the rest can be found here.

Very interesting… and familiar to how the process has been with Bea Quarrie for Vimy.

It’s risky stuff, letting people be creative, but the potential for a better outcome makes it worth it, in my opinion.